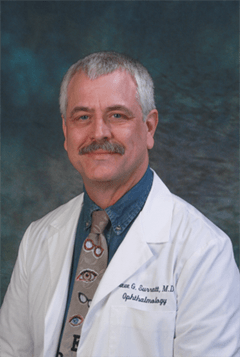 Steve G. Surratt, M.D. earned a bachelor’s of science degree in biology from Stephen F. Austin State University in 1979 and his medical degree from the University of Texas Medical School at Houston in 1984. After completing medical school, Dr. Surratt completed an internship in preliminary medicine and then spent 5 months in an internal medicine residency at Scott and White Memorial Hospital in Temple, Texas. He then completed a 3 year residency in ophthalmology at Scott and White Hospital where he graduated in 1988. Dr. Surratt spent the next year working at the Olin E. Teague Veterans Center in Temple after which he moved to Cleburne in December 1989 with his wife Carrie and 4 children. Dr. Surratt practiced at Kimbro Medical Center in Cleburne until 1993 when he established Cataract and Eye Center of Cleburne in its current location. Dr. Surratt performs cataract surgery, eye lid surgery, laser procedures and treats various eye diseases.

Dr. Surratt is board certified by the American Academy of Ophthalmology and was named Fellow in 1991. He enjoys hunting, fishing, working outdoors and spending time with his family; especially grandson Levi.